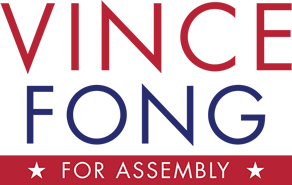 Bakersfield, CA – Today public safety advocate and community leader Vince Fong announced that he has received the endorsement of the Kern County Prosecutors Association (KCPA) in his campaign for State Assembly.

“We are looking forward to working with Vince Fong in the Assembly,” said KCPA Chair Michael A. Caves. “He will advocate for policies that will allow us to fight crime and keep our streets safe. Vince has our full support.”

A Kern County native, Fong currently serves as the District Director for House Majority Leader Kevin McCarthy, a position he has held for nearly a decade. In this role, Vince has been at the forefront of the fight to encourage small business growth and create job opportunities for the region as well as lead the conversation on a number of regional issues. Of note, Vince worked to organize the first ever Valley Fever Symposium, bringing the issue into the national spotlight.

Recognized for his support of the law enforcement community, Vince has quickly earned a reputation as a thoughtful, solutions-driven leader. As an Assemblyman, Vince plans on work to fight tax increases, limit government overreach, and enhance the safety of our communities by opposing reckless legislation like realignment.

“Safe neighborhoods provide the foundation for any prosperous community,” Fong responded. “Prosecutors play a vital role in keeping criminals off our streets. I am honored to have received KCPA’s endorsement, and hope to work alongside law enforcement leaders in the Assembly.”